We’ll be hand in hand down in the park

Although it was (very) windy, sunny, and in the low 60s today, S and I used a hooded winter coat and cap while walking around or neighborhood for the first time in two months! It seems that summer has gone by before it even begun here – so I’m going to rewind the clock a bit with a much overdue post! 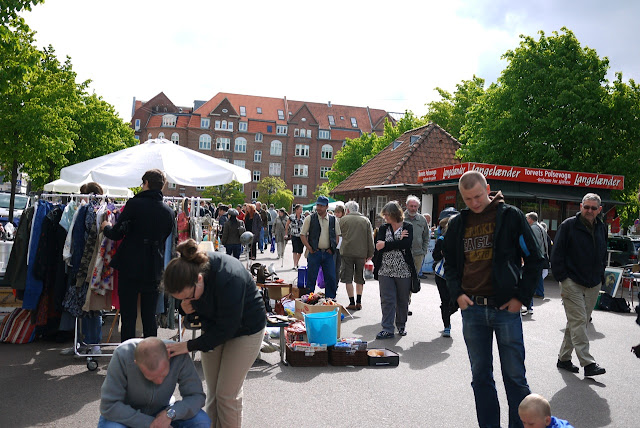 It was cold back in May as well. As you can see in these pictures, we were still wearing coats and scarves! On this particular day (the fifteenth), we took the day off to visit a flea market that happens about once every month or two. We found a lot of things, but in the end, we still didn’t know if we would be staying longer in Denmark at the time, and passed on every little treasure we found. 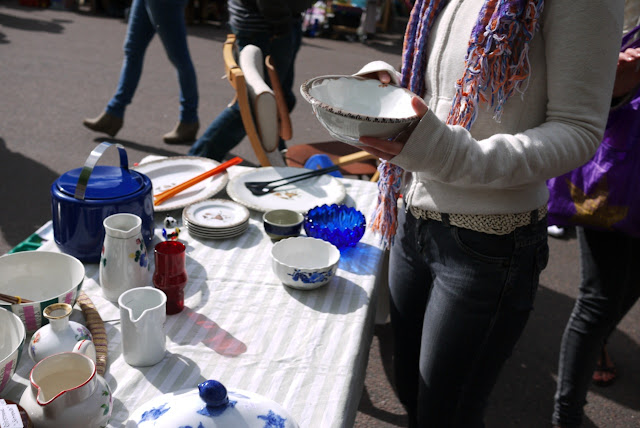 While there, we kept telling ourselves how much we regretted not checking out the markets earlier. We could have saved the environment a bit by outfitting our entire home with second hand housewares from down the block, rather purchasing all those new things from all those shops all over town. They even had a couple of ca. mid 80s Bang and Olfsen decks (BeoMaster 3500 and 3000-2) for around 60 bones – and – a set of matching speakers! (Gonna totally nerd out now by telling you that they were 40w BeoVox 3800s with a frequency range was 35-20,000 Hz!)
The only reason I cared was because I spent months and months scouring dba.dk (a Danish Craigslist/ebay) as well as subscribing to email alerts anytime a BeoMaster 4500 was posted. Although I gave up my dream a long time ago of owning one of these old amps and pumping out minimalist electronic music or industrial from it, we still ended up with a fun Danish mark (Scandyna) when we bought a system just a few months back. Life lesson? Not sure if there is one! You just can never, ever have enough audio equipment in life, amiright? 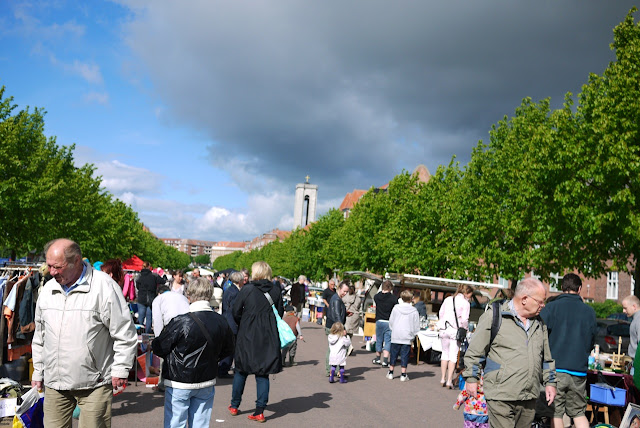 Anyhow! With the ominous and dark clouds approaching, we decided to head home. On the way home, we were able to hear the sounds of the classic car race being held at Mindeparken, just a short walk away, so I talked S into coming with me to see what they were all about. To be safe, we grabbed an umbrella on the way. 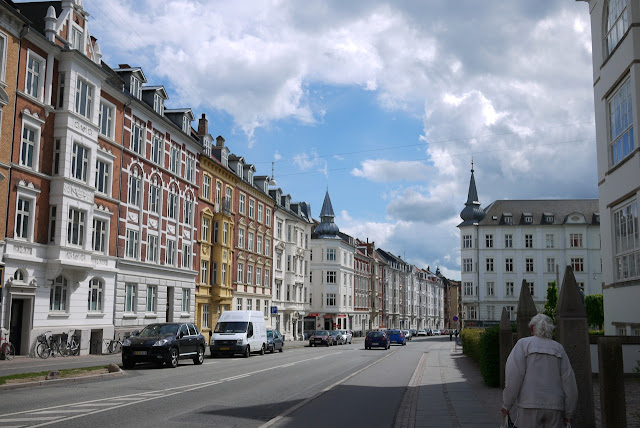 Just like always, I didn’t really know what to expect, but we were both hoping to at least get a glimpse of something fun. We heard that some of the royal family was in town for the event as well, but aside from the noise in the air there wasn’t much else to go on. When we got there, we saw that they had blocked off any view of the racing that was going on, and were charging an arm and a leg for admission. No biggie, we’ll just walk around and then go home. Oh, but what’s this on the left? 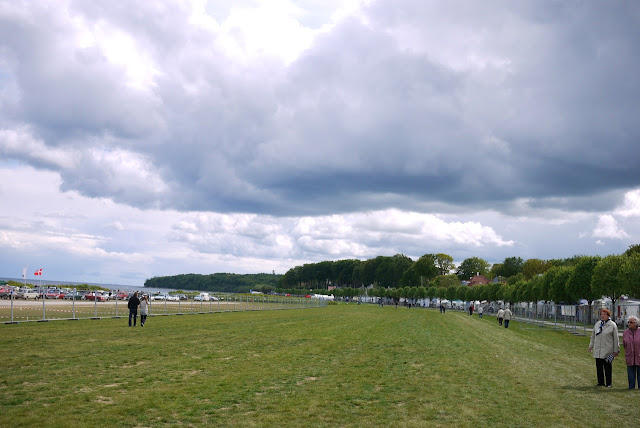 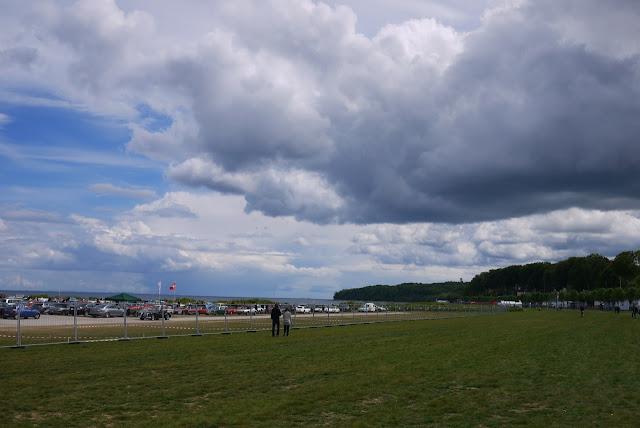 Turns out it’s an open area where owners are displaying their classic cars! 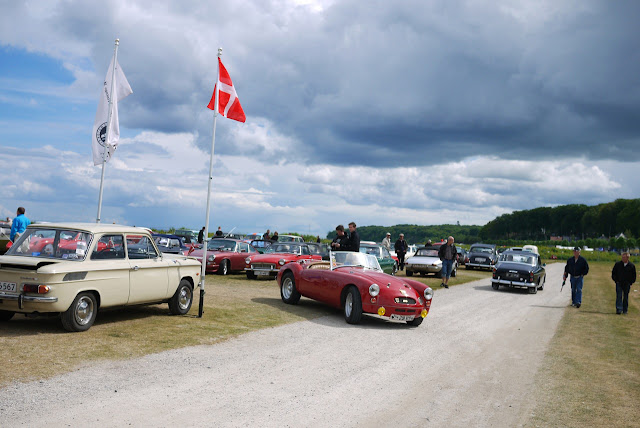 This might just be the American boy in me, but I LOVE cars! It’s sad, but I’m always looking at cars wherever I travel. With the little car show they had, it was nice to see some of my childhood dream cars, especially the European ones that I’ve rarely seen in person or grew up around. 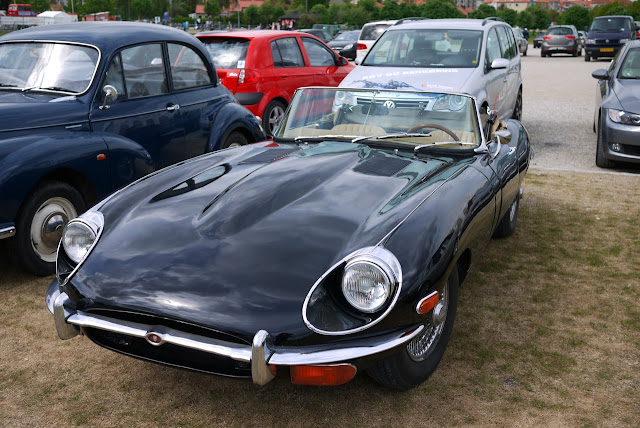 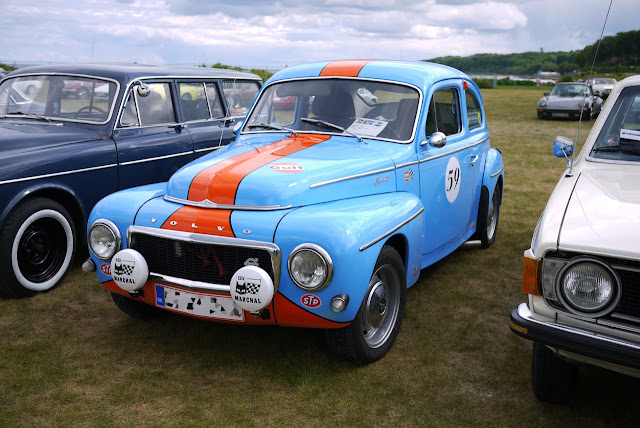 Here’s an E-Type, as well as what looks like a Volvo Duett in Gulf livery. I’m not even sure if they raced these things, but it just goes to show you that some cars can look great in Gulf livery! 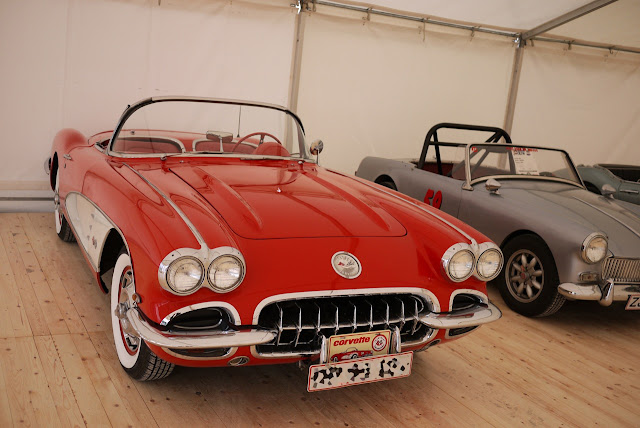 You know it’s strange, but every time I see an American car outside of the States (old or new), or a classic Japanese car outside of Japan, it just feels wrong in some way. For example, I saw a second generation Firebird, and a fourth generation Camaro the other day on the street, and they just felt like posers. Perhaps because I would never pay three times the cost for one of those disasters (Maybe the Firebird).  However for this Corvette (or for the second generation 'vette), I could certainly understand! 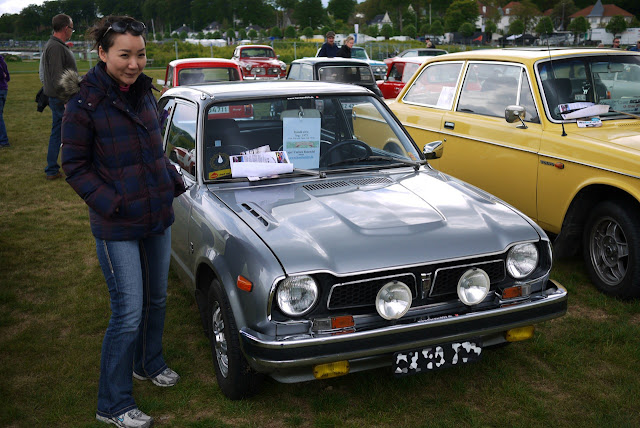 This little number will take you places! (S had a Civic back in the states as well.)
:) 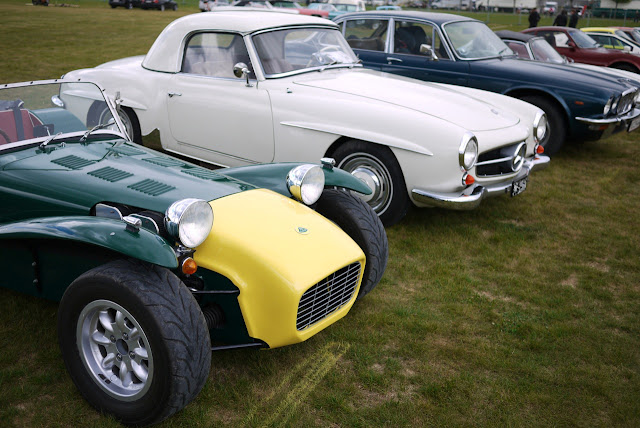 They had cars for every occasion at the park. For example, the Seven on the left will be my choice purchase for my midlife crisis, but the 190SL next to it would make a great anniversary gift! And if you need a truck in Denmark, they've got just the solution for you: 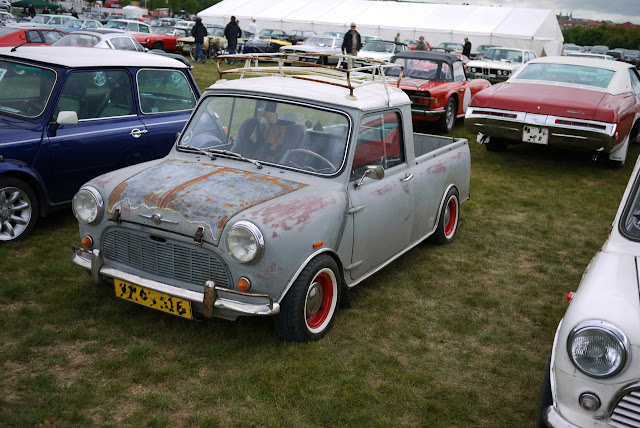 The yellow plate here shows that they got around the 180% tax by declaring it as a work vehicle! (Classic cars actually have a lower tax as well.) Otherwise who knows how much it would cost! From what I could see, they’ve invested quite a bit: hood clips nowadays show that the bonnet is made of carbon fiber (they’re belt buckles here) and the racing rims alone would be worth thousands…of Kroner. Seriously, I love this mini! He totally stands out! 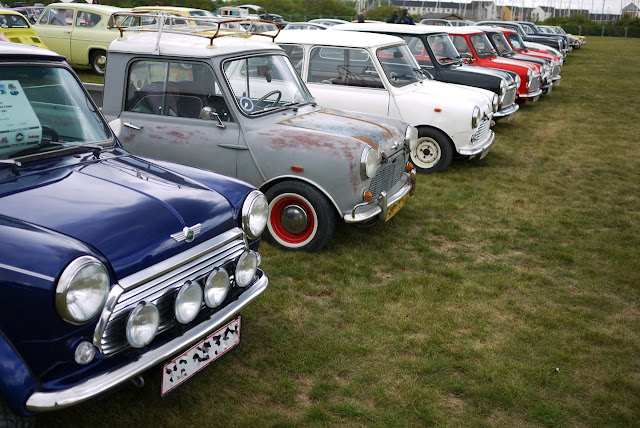 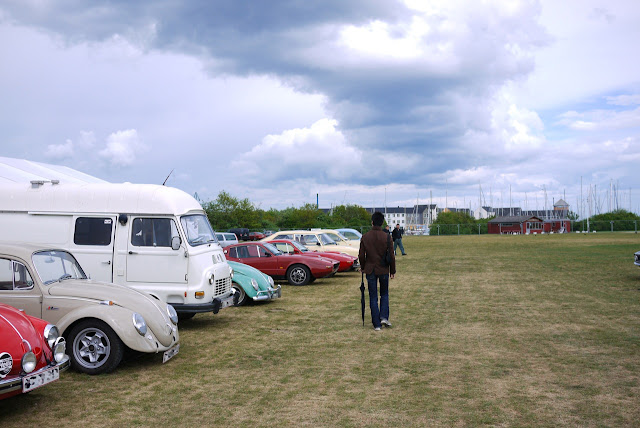 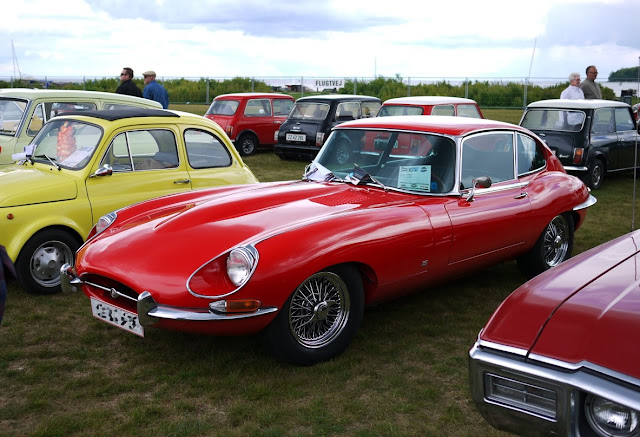 Here's another lovely E-Type, this time a coupé. 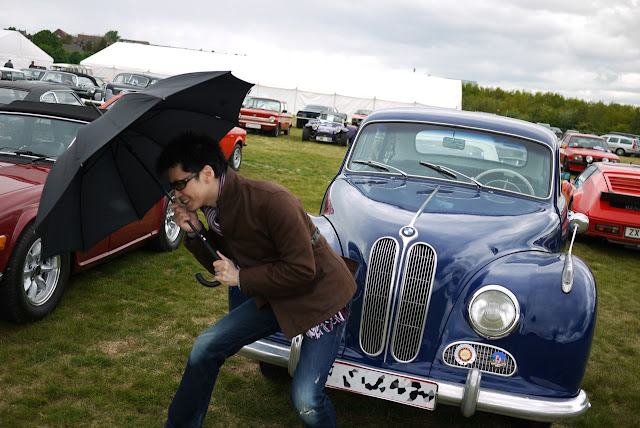 The wind started to get fierce (see how it presses down the umbrella?), and it was starting to rain, so we decided to call it a day and head back. Here's one more for the road: one of my most favorite cars ever: the Citroën DS! 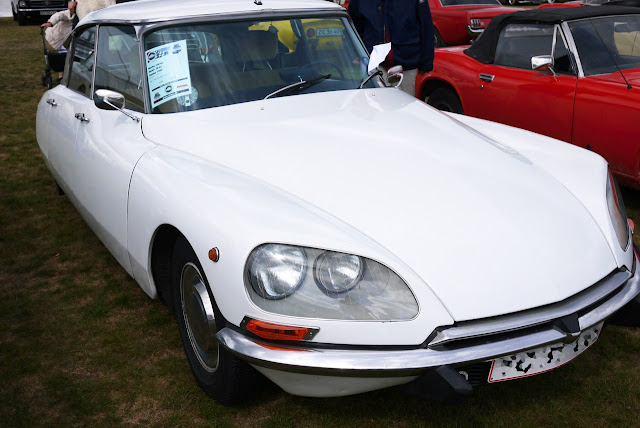 The steering wheel is one of my most favorite aspects of this car. Don’t you just love it? 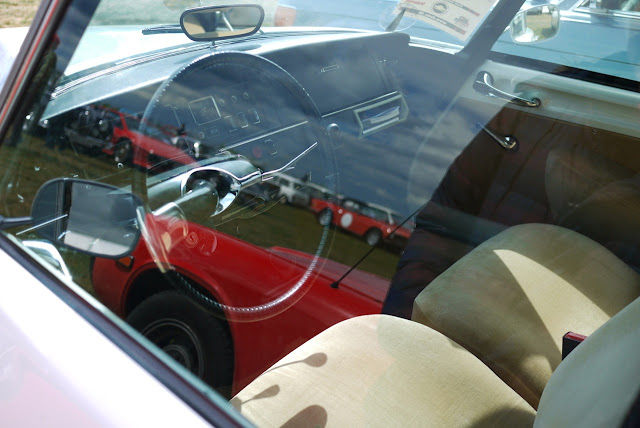 Mindeparken was also where we went last week as well (to support some of S’s colleagues that were taking part in the 5k DHL Relay Race). For some reason, we thought it would be much futher away, so we took the bus. From the windows we could see a few people running, and tried to make out the faces of anyone we knew. 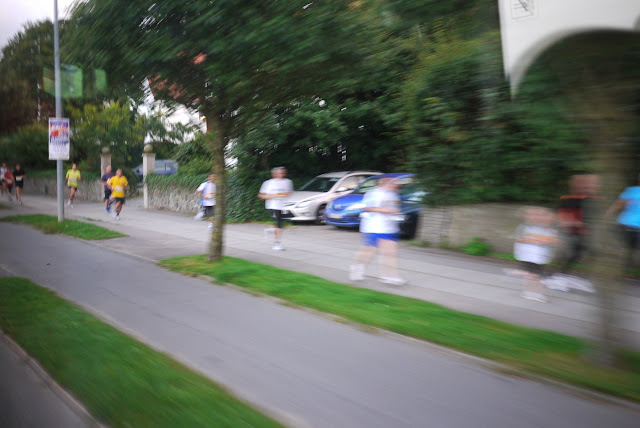 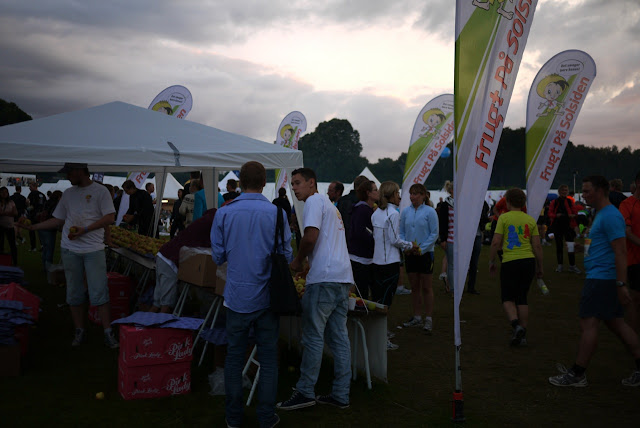 After getting off the bus and coming closer, we saw that this might actually be pretty difficult, since the race was a lot bigger than we thought! After standing around and looking a little lost, we ran into a classmate from our Danish class, and he led the way to where the Aarhus School of Business folks were located. Walking through the crowd, we started to see people carrying beer, and grilling sausages. 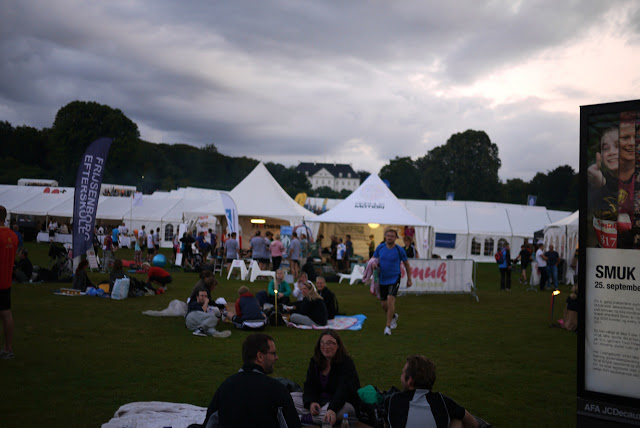 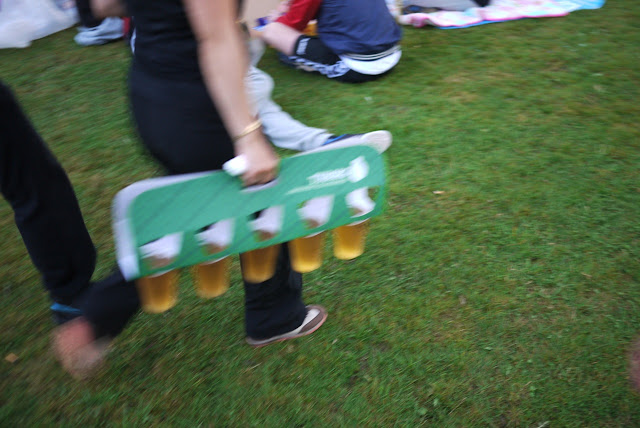 We were getting close. Here’s a view of Queen Margrethe's summer palace. It was our first time to see it, so we'll have to come back and get a closer look someday. You can also see the Aarhus University jerseys in turquoise that say “We run with knowledge”. There were all kinds of firms and companies taking part, and thousands of people running. 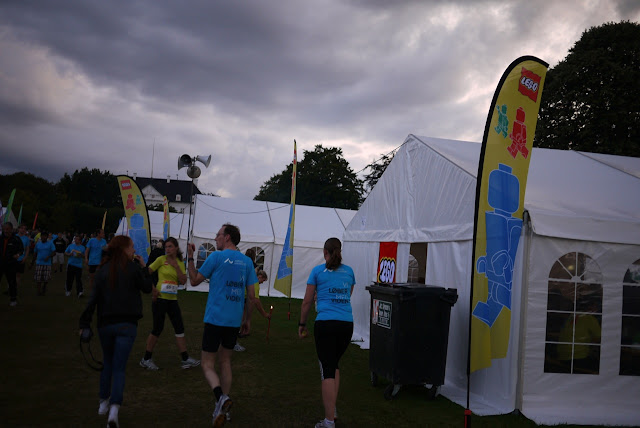 Seeing all the tired and sweaty people in jerseys, we really felt unhealthy. After all, we took the bus when we could have walked 10 minutes at most! We looked at each other sadly and knowingly! Not only did we not bring cash (thinking that we didn’t need the ice cream that we always see on sale at these open events), we didn’t even walk to (or at) the event! Did we deserve a beer? Well…do they take credit?
As weak and as guilty as we were, we decided to go for a beer (we love beer!!!), but as we neared the beer tent, the feeling started to sink in that maybe a beer wasn’t fair for us. Maybe next year, if we take part, then we can have beer. And that’s when it happened: we made a resolution to be more active and healthy at the gym! Really! One could even say the experience was inspiring. 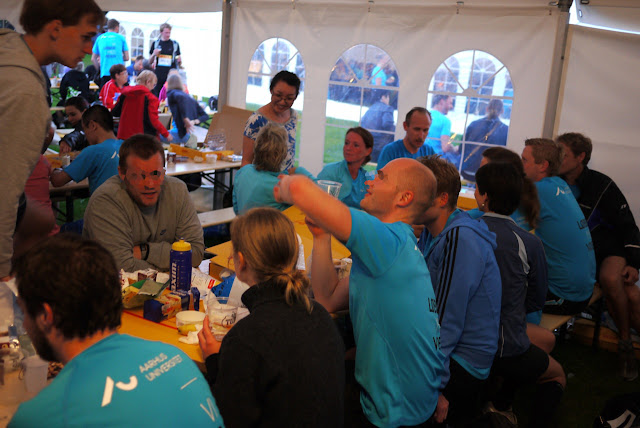 We went back to the Aarhus University tent, where we met up with friends and colleagues, and chatted the evening away. Guilt-stricken the entire time, I nibbled on some of the free cookies that were offered to us. Thinking back, it might not have bothered S as much, though, cause she ate as free-spirited as ever (although we had a big dinner beforehand)! When the time came for the fireworks we heard about, we cleaned the area we were at and walked out to find a spot to take it all in. The moon was really fat, low, and yellow that evening, reflecting a little bit of what I felt. In the end, we scored a lot of free food that we totally didn’t deserve (sweets, deli snacks, sugary drinks, crackers, bags of chocolate-covered marshmallow banana candies), but we knew that next year, we’d try to make up for it! 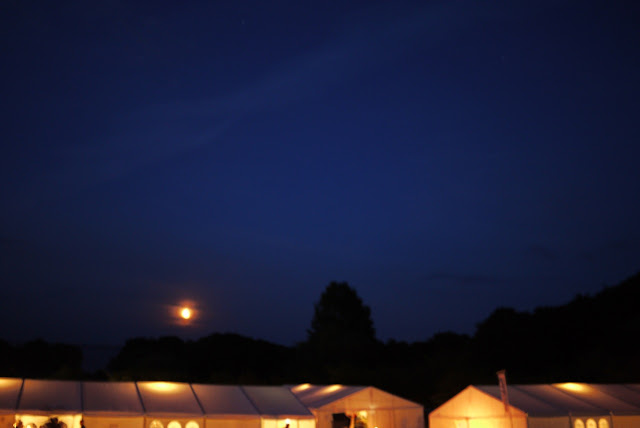 The relays had been going on for the past two days, and from our apartment, we could hear the fireworks going off each of those nights. For the third evening, they really put on a show! 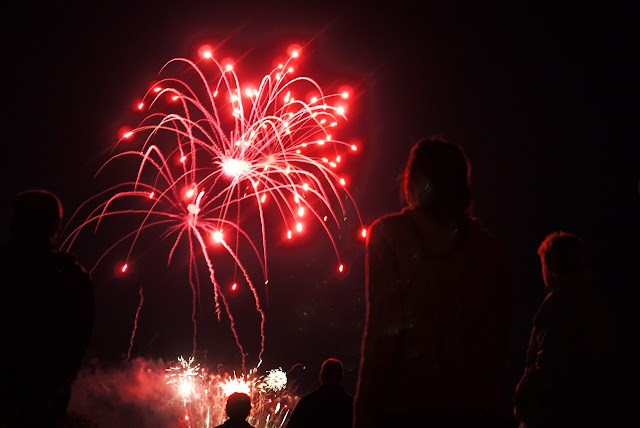 Even though we were in Japan during the summer festival season, we didn’t catch any fireworks while there. This really made it feel like summer for us. 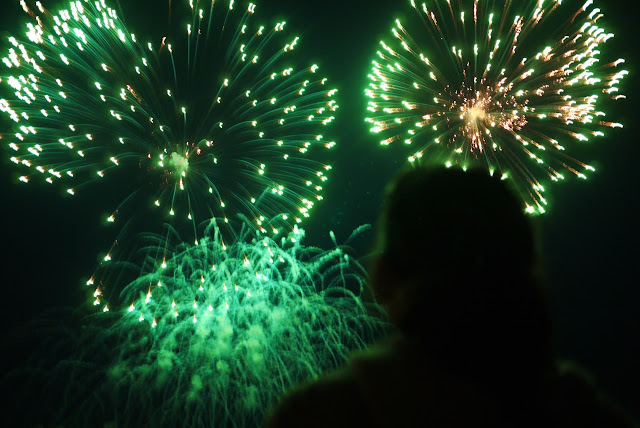 The size of the crowd was also amazing. We had never seen that many people in Aarhus before. With the size of the crowd and the fireworks, it had actually felt like a big (almost Japanese) city. Impressed and inspired, we were ready to make a new start!

At the end of the show, our friends offered to drive us home to our protests. “No,” we cried, “no way would we deserve it!” but guess what? With a big, big sack of free food in our hands and all full of shame on the inside, we took them up on their offer, and enjoyed every minute of it! There's always next year!
I just love the summer! Isn’t it a beautiful thing?