The crowd call your name, they love you all the same

S. and I went to see a national handball match a few months ago between Aarhus GF Håndbold and AG København. Are you wondering what handball is? Well, rather than get into what exactly handball is, and the rules of the sport, I just think of it as basketball from a Danish perspective. Not only did a Dane help invent it, but there are also a few Scandinavian approaches to how people play and participate: it’s simple, it’s modern, and it’s collective. I think these things make it quite fun to watch, as opposed to other sports, like dodgeball (which might be more fun to play, but not watch…unless it’s a movie with Vince Vaughn. 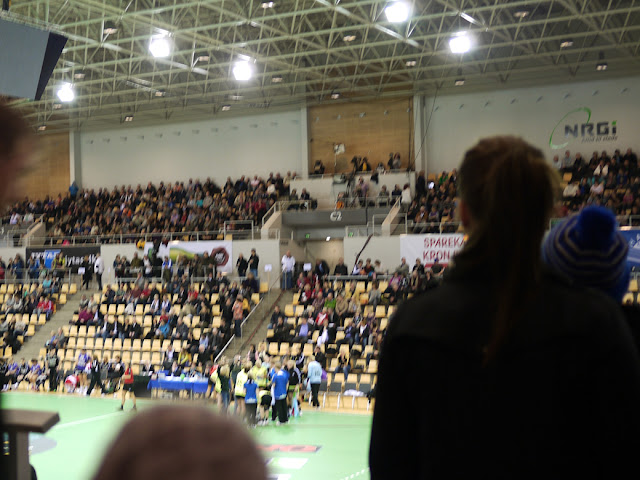 We got pretty bummed when France beat Denmark in the world cup final earlier this year, especially since Denmark has never won a world cup title. But they really put in a fantastic effort, and made believers out of everyone watching. Also, by watching it all unfolding on TV, we became more familiar with some famous players, and watching a national match would give us a chance to see these talents in person. Michael J Fox look-alike, Hans Lindberg, wasn’t there, but Danish star (and teenage heartthrob) Mikkel Hansen was in town. I have a suspicion that he is the reason why s. bought the tickets in the first place, but I’ll let it slide =)
Sadly, the national teams don’t have mascots (to our knowledge) so before everything started, we just made some up! We called the local team the Aarhus Tigers (cause every country needs at least one team named the Tigers, especially when we can’t think of a better name). For the evil visitors, we called them the Copenhagen Flying Mermen, just because it seemed to fit. To watch the Tigers and Mermen go at it, we took the bus to the nearby stadium, which is really just a 15-20 minute walk away. 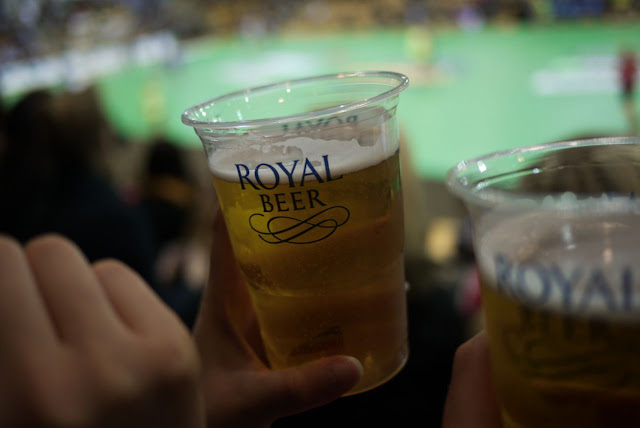 Once we were there, we found out that we could sit pretty much anywhere (no matter what tickets we bought), and did as the Romans did, and made our way to the concessions to pick up some $10 beers. 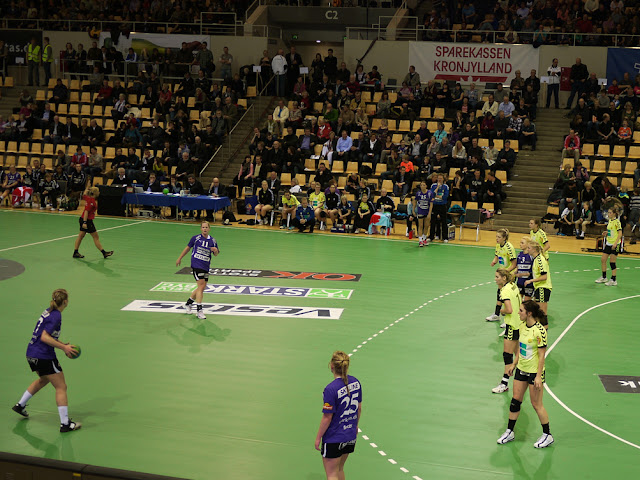 The earlier match between two local girls’ teams was just wrapping up as we were taking our seats. The home team was getting pummeled. Although there was not much energy left towards the end of the second half, they gave it their all, and lost in brilliant fashion, just like the national team did in the final, but just not as close. You go girls! 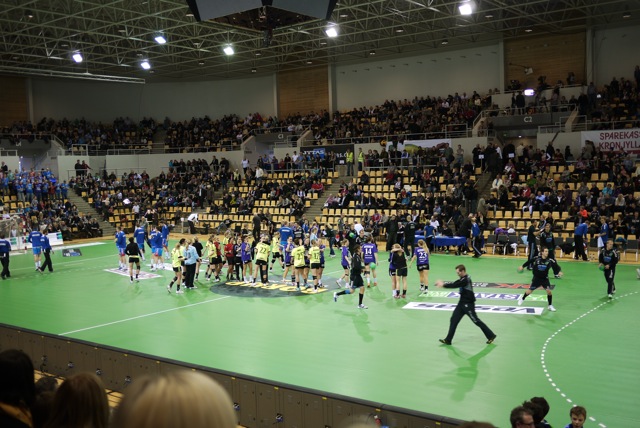 Next up was the big show. The Tigers, with their pointy claws and fangs were sure to put up quite a fight against the Flying Mermen, what with their clumsy big fins and fancy opposable thumbs. This was the Lakers vs. Celtics, Tom vs. Jerry, paper vs. plastic, Godzilla vs. Mechagodzilla – I’m tellin’ ya, the excitement was through the roof! 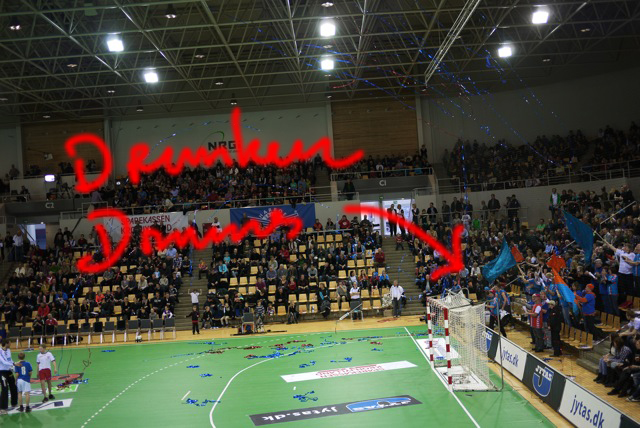 The visitors brought along their own drunken drum section, while all the locals were given paper programs that folded into noise makers! It was on like Donkey Kong. There were no cheerleaders though, which was a bit of a downer, but holy mackerel, they actually had a Tiger mascot! S. and I nearly lost it when we saw him. Could it be that they are really are called the Tigers? I guess it could have been worse. They could have gone with Jaguars or something lame like a Buckeye or Sooner. 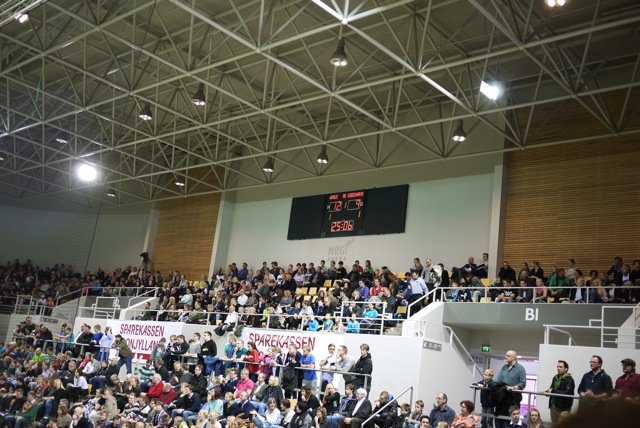 After a fierce half, the Tigers were leading by three points! During the break, all the children gathered on the court to watch this guy do tricks with a soccer ball. He was really fun to watch, but I told s. that unless he did something with a jump rope, the wow factor would quickly plateau and wear off. Low and behold, he busted them out, and all was right in the world. 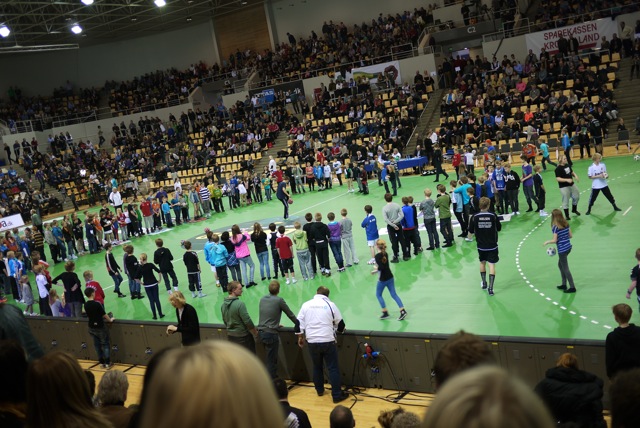 Well into the second half, the Mermen would always have an answer to the Tiger scores. It was still a tight game, especially with Hansen out on a couple of two-minute suspensions. There was a lot of back and forth and lead changes, and with every local score, the crowd went bananas. This video will give a good idea of what it was like. (The home team is in black.)
The Tigers were doing awesome, right up until the part where they were losing. With two minutes left, local support started to dwindle and the realization of yet another defeat started to sink into the fans. Not sure if they chanted the Danish equivalent of something like “TSO, TSO,” but that may have been possible as well. We sure got a good look at Hansen though. Probably the most dynamic guy on the court. Quick, guess which one he is: 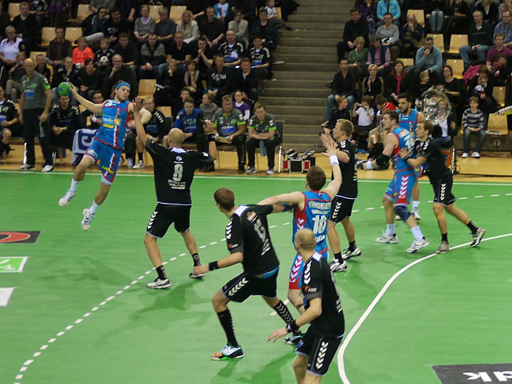 At the end of the day, and despite all of the losses we experienced watching handball, just sharing in the highs and lows with the home crowd made it all worth it. Maybe S. and I are bad luck (or maybe the dumb refs always ruin everything)! Tigers4Evah!
Posted by p. at 4:31 PM