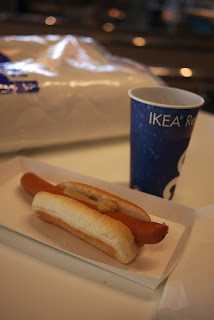 Took the bus for the first time (the day before yesterday) to go to Ikea =)
Not the first Ikea I've been to, in fact, it felt a lot like Round Rock, except I had to decipher Danish and the kroner =) They even put it way out in the boonies. I suppose that's how they make money for their deliveries.

After the hike outside and inside the store, I also went to the shop next door to pick up a shower head. In the end, it was all just a small shopping trip with a hog dog, as well as a cat.

Since the machine on the bus to buy a ticket was broken on the way there, I wanted to be sure to buy a ticket on the way back. I found out that I bought a kids ticket when I looked it up later. =( But that's not the strangest part: even stranger were the three people that got on the bus, and then got off at the next stop. We started hearing a meowing sound, and at first I thought it was someone's cell phone, but sadly, the three people abandoned a poor white cat there for someone else to take care of. I was SO, SO close to taking it in, but who knows what that would have done to our renting agreements! Some friends of ours thought perhaps it was because of the summer holidays and people going on vacation, but next time we'll go ahead and take in the cat!
Posted by p. at 11:38 PM