China all the way to New York

We met up with our new friends (that s. had met at the airport in Billund, where they flew in together from Frankfurt last week) for a Chinese dinner yesterday evening. s. and I had been anticipating this for quite some time. They had been to Århus several times before, and should know where all the good Asian eats are at! 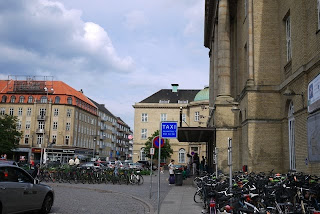 So here we are. 5pm sharp on saturday (and by sharp, I mean sharp!) Those are our friends there, in front of the main station. After chatting about some other people that we would meet later, we started off on our walk to the special restaurant. What would it be? Buffet? Hot Pot? BBQ? Home Cookin'? What? What?? 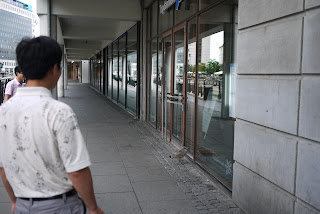 On the way we saw a gull that was in love with its reflection. s. wanted to stick around and goof-out with the bird, but when you're with a bunch of guys you gotta be serious! the bird wouldn't budge, no matter how close we got. 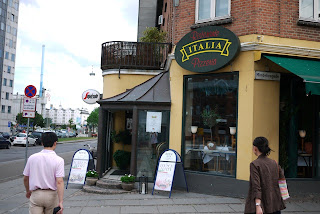 So! Here we are! Wait, Italian? That sounds great! Our Chinese dinner is still Chinese no matter what, and the awesome thing was that it was also a buffet style. We all stuffed our faces and talked though some heavy rain, and then sunshine again. While there, we met two Chinese women that were in the Vestas graduate program, which was essentially a 24 month/3 country rotational program. Awesome sauce! 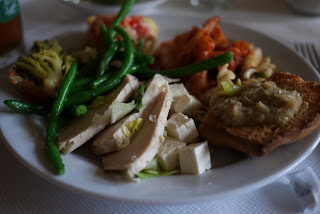 After dinner we went for a stroll down a river that no one knows the name for, and while admiring someone's 1970 Alfa Giulia, an Egyptian stranger lit a cigarette, approached us, and asked what we thought of the car. Down the rabbit hole we went, talking vintage style and product design. Turns out that the man that spoke to us is the owner of a red Harley-Davidson previously owned by an IBM exec from Texas, as well as a modern design shop, full of first-run designer furniture and art that was right there on the river with no name. We toured the shop and talked art, cars, and women (s. wasn't listening.) 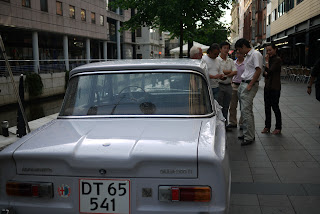 Here's a picture of him showing us a photo of his girlfriend in a 50s Jaguar XK120 (sweet, but I like the E-Type more). If you are in the market for a car or furniture in Denmark, it's way smarter to buy vintage (less tax!) 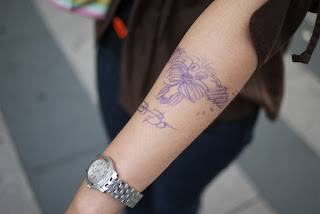 So what was s. doing during this time? She was playing with the owner of the Alfa and his dog, BoBo. She even got a temp-y-tat. While there, BoBo ran off to chase some ducks at the river, and the mother duck got into a big argument with BoBo while the other ducks went swimming away. It was quite a sight to see two animals barking and quacking at each other, with an elderly Danish man running out and yelling at all of them to stop. 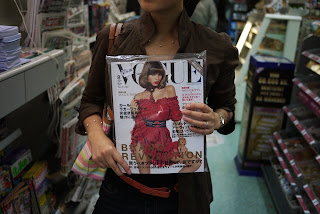